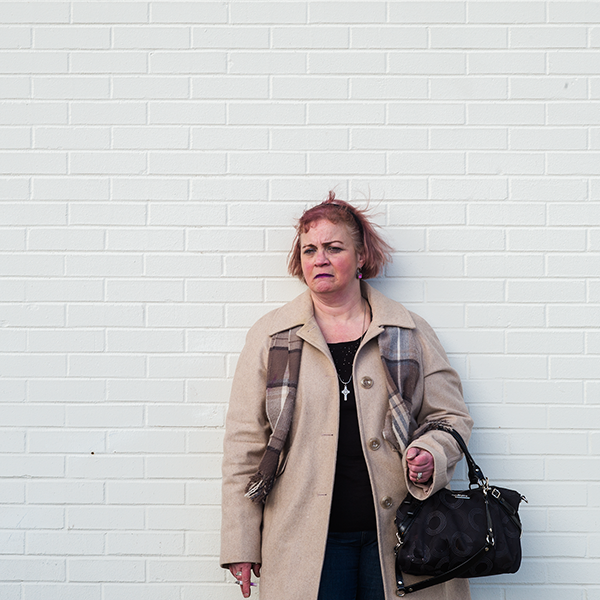 It’s midway through my first MFA semester and I wanted to reflect on my studio work. It’s been a difficult two months for me creatively. My mentor, Greg Miller, has me working in a different way than I’m accustomed to, and as a result has tossed me into uncomfortable seas. I’m a bit disappointed with my work so far, but I’m hoping I’ll improve by the June residency and adapt to visual situations as they are presented to me.

Greg is encouraging me to think more about characters and dynamics of the people in my images. He wants the people to have purpose. This is very difficult for me as my best six portraits (ones selected by Greg), were all taken on the fly with existing characters I found on the street. I would see someone I was interested in visually, approach them, and try to take their portrait. Greg wants me to think more cinematically, and even try copying scenes from movies as an exercise. He doesn’t want me to hire a model without a plan in place. I’ve tried sketching out images and scenes beforehand, but haven’t had much success with it at this point. We’ve also had terrible weather this winter, so it’s been hard to find random people outside, so I’ve resorted to models. I’m also feeling the pressure of trying to make images every two weeks so when I Skype with Greg I have good work to share with him.

Suzi modeling for me in the snow and rain during blue hour at Craigville Beach.

I live in a semi-seasonal community on Cape Cod and in the winter it can be challenging finding portrait subjects. I’ve posted various ads online and have receives limited responses. I’ve worked mostly with a student named Suzi, my brother Mike, a smoking nurse named Regina, and an exhibitionist septuagenarian named Bobby. I pay the “models” $20 per hour and have them sign releases. So far Id say my work as been mediocre using this method.

“Mike” from my series focused on motion called “Janus.”

I had an idea a awhile back that I wanted to work with motion. I started a series I call “Janus” after the double-faced Roman god. It involves long shutter speeds with the subjects posing in front of a black background. I then directly a small bit a light and have them move from one position to another. So far I think this is my most success project this semester.

Struggling to Find a Project

My pictures are lackluster because I can’t seem to find a portrait project to pursue. I’m having trouble creating a body of work that I’m passionate. I would like to make more intimate pictures, but can’t figure out how to get access to people in their homes. At this point I feel a bit like I’m coasting until I find a subject or project that inspires me. I’ve stopped shooting landscapes altogether because I’ve begun to find them uninteresting. I was hoping to have a cohesive photo essay with one subject for the June residency, but this might not happen.

Switching to Another Art From

Because I’m a graphic designer, I often work in different mediums. Since January, I’ve only taken photographs. I’d like to spend some time (if I can find the extra time) to work on a sculpture or a model of a sculpture I can have ready for the June residency. I have some ideas, but haven’t had time to follow through on it yet. It would be collaborative, as part of the project I don’t know how to make myself.

Working with a Master Printer

Through happenstance I met a master, digital printer names Bob Korn. I met with him for a one-on-one session and he processed and printed 8-10 of my images. I’ll be attending a talk by Bob this week, as well as a half-day workshop. I’ll be working with Bob to create the prints I bring to the June residency. Bob has selected one of my images to be included in an upcoming show at this gallery.

I’ve been trying to balance my time between work and MFA projects. I wish I had more daytime to devote to MFA projects. I’m always cramming in photoshoots on the weekend and in the dark after work. I’ve cut back on some of my freelance work to accommodate my MFA projects. Right now I’m juggling quite a few things and am a bit fragmented. I’ve been doing a lot reading, right now I’m reading Sally Mann’s memoir Hold Still. I’ve been going to exhibition and watching videos about painters and photographers. I completed the MoMA class “Seeing through Photographs,” which I thought was outstanding. I learned about a many photographers (new and contemporary) and techniques (analog and digital). Two of my images were selected for the Lesley student juried show, “Taking In” opening May 3. In February, I had a small local show of the my landscapes and seascapes at my local library.

I’m hopeful that my work will come together by June. I always shoot better in the summer and fall, so I’m looking forward to the change of seasons. I’ve signed up for two additional, non-Lesley, classes this summer. In July I’ll be heading up to Maine Media to take a portraits class focusing on natural light, and in August I’ll be trekking up to Provincetown to take Marian Roth’s pinhole camera workshop. I think the change in medium my free me to do different work. I’d like to try making portaits with a pinhole camera.